For as long as I can remember, I've loved Christmas. And that’s probably an understatement! For me, the days during Advent and then especially between Christmas Eve and New Year's Day are the most beautiful of the whole year. Yes, even nicer than birthdays. But that certainly has something to do with our Schloss Hotel and the way we celebrate the festive season here. 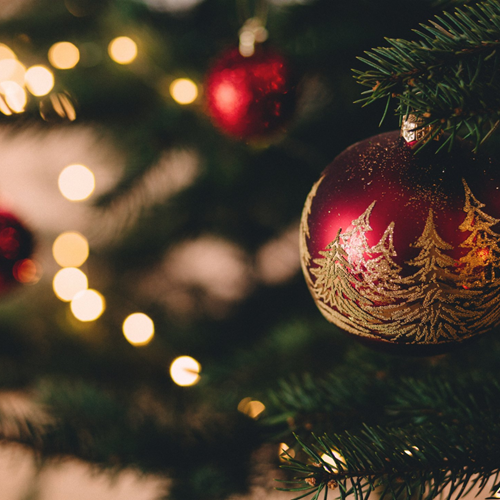 The advantages of Christmas and New Year's Eve celebrations at the hotel are obvious:

Sharing special moments with one another

At the hotel, we don’t believe in over indulgence. We prefer to give fewer and smaller gifts, which I personally find very appropriate in this day and age. There is nothing more precious than spending time with one another. Even the staff clear away the few bits of wrapping paper which accumulate, without attracting attention.

When you are in a hotel, you simply have to dress appropriately, especially at Christmas time. You never see our guests in the lobby in pyjamas or tracksuit bottoms.
People always make an effort at the hotel and especially during the holidays. And I in particular like well-dressed guests.

I'm a creature of habit, however when one finds themselves in a different environment, one automatically makes different plans and is lovingly forced to try new things:
new ideas for outings and walks, different Christmas menus and maybe even other traditions.
Speaking of traditions, we are very proud of the fact that our team represents many nationalities. Christmas is a beautiful time because that's when everyone celebrates their own customs. I have prepared a summary for you:

Rosa originates from southern Italian. In her native Puglia, the nativity scene is more important than the Christmas tree. In the past, an entire room was dedicated to the manger. Relatives, neighbours and friends were invited to come and wish each other well. There are even living nativity scenes in which people replace the figures. In keeping with the country's culinary tradition, Christmas Eve starters include focaccia, mozzarella and cold cuts. Then seafood is served, followed by roast lamb or fried cod. For dessert, in addition to the world-famous Panettone, there are usually "Pettole", which are small balls of dough, deep-fried in oil and coated in sugar, chocolate or honey. The big classics for Christmas Day are "Focaccia Barese", lamb with potatoes or vegetables, chicory soup and the famous "Pasticcio", optionally with cod and leeks.

Susana's family comes from northern Spain, or Galicia. Here appetizers include seafood served together with cheese and meat platters, accompanied by the famous Spanish sparkling wine, Cava. The main course is often roast lamb or turkey with vegetables and potatoes. This is usually accompanied by wine. Spain is one of the largest wine regions in the world and one of the biggest exporters. Typically desserts include "Polvoron" (a crumbly lard pastry made from flour, sugar, milk, almonds and nuts), white nougat called Turron and of course the famous marzipan "Mazapan de Toledo". Spain has a special tradition during the festive season: the Christmas lottery "Sorteo de Navidad". Measured in terms of the total amount played, it is considered the largest of its kind in the world. The Spaniards affectionately call it "El Gordo", which translates as "the fat one", referring to the extraordinarily high main prizes. But my favourite is the New Year's Eve tradition: 12 seconds before midnight, one grape must be eaten every second. 12 grapes for 12 months – each associated with a wish.

Sara, from Portugal, told us about a particularly funny tradition: The Christmas table is not cleared. Instead, new dishes are served long into the night in order to pay homage to the baby Jesus. The most typical Portuguese Christmas dish is quite simple: cod served with potatoes, vegetables and boiled eggs and drizzled with olive oil. In the Minho, Douro and Trás-os-Montes regions, octopus is also part of the Christmas meal. The traditional desserts are "Rabanda" (similar to "French Toast"), "Sonhos" (fried dough balls), "Filhós" (Christmas doughnuts), "Aletria" (sweet Christmas pasta) and "Leite Creme" (the Portuguese version of a crème brûlée). The cake "Bolo Rei" contains a boiled bean and whoever finds it has to pay for the cake the next year. Gifts in Portugal are only opened after midnight mass and in colder areas the big bonfire "Madeiro" is lit by young people who will come of age in the same year.

Greece - bread as the centre piece

I would love to experience Greece during the festive season. On Christmas Eve, the children go out into the street and sing Christmas carols called "Kalanda". This is supposed to bring luck and blessings for the whole family. Sometimes they carry a model boat decorated with golden nuts. This is what Eirini from Greece, told me. For dinner, there is often lamb or pork roasted in the oven or on an open spit. This is accompanied by a spinach and cheese quiche (Spanakopita) and vegetables. Other Christmas and New Year dishes are Baklava or the Greek Christmas pastry "Melomakarona". A traditional table decoration is Christmas bread. It is spiced with cinnamon, orange as well as orange pieces and decorated with a cross. The bread is baked on Christmas Eve and eaten on Christmas Day.

The best moment for Claudia, from Germany, is when her dad unveils the Christmas tree on 24th December. Together with her sisters, Claudia decorates the tree whilst watching the world-famous fairy tale "Three Hazelnuts for Cinderella" on TV. In the afternoon, all the relatives come over for coffee, Baumkuchen and gingerbread and every year granny encourages everyone to sing. After the nativity play at the church, the family traditionally enjoys wiener sausages with potato salad, fried fish with horseradish and beetroot, herring salad, smoked ham and grandma's lemon cream for dessert. Only then are the presents unwrapped. On 25th December, a Christmas goose is served with dumplings and red cabbage.

Our Pamela comes from Denmark. Traditionally on Christmas Eve roast pork and duck are served with potatoes, red cabbage and gravy. People cook all day long. After dinner, families gather around the Christmas tree and sing the typical Christmas song "Højt fra træets grønne top stråler juleglansen" (High from the top of the fir tree). For dessert there is a portion of rice pudding with cherry sauce. The main emphasis here is to find the hidden almond. As a reward, the finder receives an additional gift for Christmas. By the way, the rice pudding is placed between the bed sheets all day long so that the rice can soak up all the milk and become nice and soft. On 25th December, the Danes celebrate with a Danish Christmas buffet including fish, pickled herring, warm liver pâté, cheese and traditional appetizers.

Slovakia - the carp in the bathtub

Maria is Slovakian. For her, the celebration of Christmas begins with Advent. The Christmas trees are decorated with colourful lights, fruits, handmade wooden ornaments and honey biscuits in the shape of angels and other religious symbols. In Slovakia, Christmas Eve "Stedry den" (the generous day) is the most important holiday. The Christmas meal consists of 12 dishes in honor of the 12 apostles. Often carp is eaten. Some people buy it alive and keep it in the bathtub until it is time to prepare it. It is accompanied by buttered bread with sauerkraut or with honey and poppy seeds, as well as potato salad and vegetables. The most popular desserts include vanilla biscuits with poppy seeds and walnuts as well as apricot balls made from curd dough.

I would also love it here: In the run-up to Christmas, Slovenia resembles a big book of fairy tales. Every town tells a story about elves, Father Frost and sunken bells in the lake. One of the biggest traditions is the baking of the three Christmas loaves. These are then decorated on a table with a nativity scene made of noodles. The family eats the first loaf on Christmas, the second on New Year's Eve and the third on 6th January. Furthermore, the Christmas table must be lit with candles, because light symbolizes luck and prosperity for the coming year. In some regions of Slovenia there is also a popular custom among children and young adults. They take a piece of paper on 13th December (Saint Lucia's Day) and write down twelve wishes. Then they cut them out and crumple them up one by one. From 13th December, the pieces of paper are burned every day until Christmas Eve. The last remaining piece of paper is then used to write the wish that should come true in the next year. Meat is the main dish, including poultry (turkey or goose), various roasts and game, but also fish. Potica is served for dessert: a round cake with various fillings such as walnuts, nuts, cocoa, bananas and coconut.

Of course, I am most familiar with these traditions. I've been celebrating with Alex and his family for years. On Christmas Eve, the Christmas tree is decorated in the morning and the manger is set up. In Zermatt, of course, we also like to spend the day on the slopes. Most Swiss families have fondue chinoise in the evening. This involves cooking various types of meat around a table in a pot of stock and eating lots of tasty side dishes such as fruit (pickled, tinned or fresh), vegetables such as mushrooms, baby corn, onions etc., antipasti and serving various sauces: tartar, cocktail, curry, mustard and garlic. For dessert, there are mainly Christmas cookies. The most popular are cinnamon stars (baked with egg white, sometimes this is applied afterwards), Chräbbeli, Mailänderli and Basler Brunsli (made with melted or grated chocolate). My favourite cookies are the Spitzbuben. Of course, the name says it all! For my article here, I stole Alex's mum's well-kept recipe. I'm sharing it exclusively with you.

Knead everything well and then cut out the cookies. Dust half of the cookies with icing sugar whilst still warm, spread the other half with jam (raspberry or apricot, according to taste) and assemble. 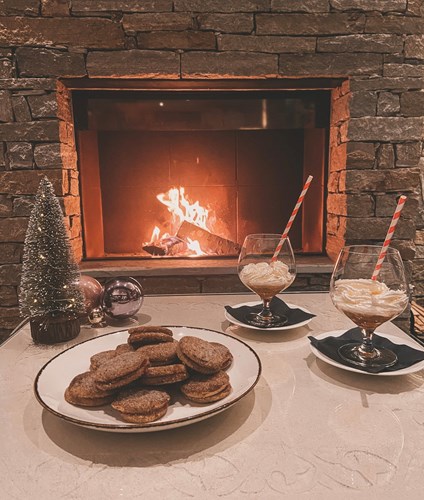