The slopes surrounding the Matterhorn are not considered a superlative ski paradise for nothing. So much so, Alex didn't have to convince me for long. I discovered skiing years ago and love nothing more than gliding down the endless slopes with him all day long. 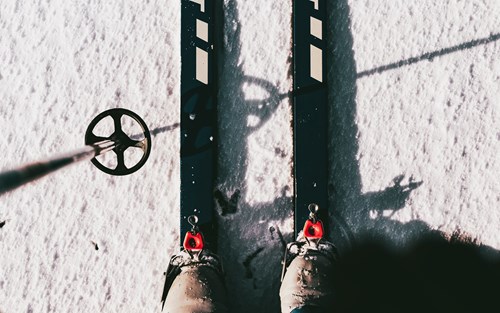 Ski-Testing is the way to go!

The best way to find the perfect ski is certainly ski-testing. At the Stöckli Ski Test Centre, our guests can try out their desired model and change skis for an unlimited period of time. This costs CHF 39.00 for one day (up to or from 12.00 noon) and CHF 59.00 for a whole day. The price for ski-testing will of course be taken into account when buying skis. The rule here is, don't choose based on style, but rather get professional advice. For example, from my friend Joel Burgener at the sports shop Bayard Sport. When I bought my skis, his first question was how do I like to ski: slow or sportier? Short or long turns? It won't surprise anyone that I wanted a racing ski. But Joel made me try something different. "When buying skis, it's worth breaking the habit and for once, choose something different from what you're used to." Joel then told me about this customer who really wanted a fast ski and also bought it. The two of them then met by chance at the cable car a few days later. Joel asked him about the ski because the customer looked pretty tired. The customer agreed with this impression and then looked irritated at the rather leisurely ski that Joel had chosen that day, because it was not his intention to be tired in the evening. "Sometimes our head doesn't allow us to admit that maybe it's not the right ski for us at that moment. This is when it is important for me to proactively show alternatives," Joel explains and further emphasizes, "I used to be a ski instructor and I also raced, but that is not why I ski a race ski per se. If I am on the slopes all day, I like to choose a more comfortable ski. But if I am only on the slopes for two hours in the morning, then it has to be a ski that is sporty and challenges me."

Renting is optimal for beginners

I also learned from Joel that as a beginner, it doesn't really matter what kind of ski you ride. Sliding down the slope in a plough doesn't demand any dynamics from the ski. Joel recommends a shorter (up to the chin), lighter ski with the same binding. It makes things a lot easier. The boots should also be particularly comfortable. Joel recommends renting skis for beginners. "Most beginners don't ski very often and they don't know yet, what they like."

Experienced skiers are more demanding. Many come into the shop very well prepared and have a clear idea of what they want. This has advantages and disadvantages, as Joel confirms. "Many can't get 100% out of what the ski is actually capable of", Joel explains. "A racing ski has to have a certain amount of pressure on it, otherwise you can't ski any of the turns. So the customer simply pays a lot and in the end, can't use the potential of the ski. That's a shame."

In this context, Joel also tells my favorite story, the one about the Arab group. There were 15 persons who bought all their equipment from him. However, the next day, the weather was bad; the guests checked out and left all the equipment at the hotel. Or even better, guests who buy skis just for a photo and then give them away. That should happen to me!

Of course, Joel also told me about his favorite piste. "That is the Kumme; start from the Rothorn and then go down to the left. There used to be pure natural snow here and there were hardly any people. That has now changed. Today there is a cable car and there are snow cannons. However, I still love the view when I go around the corner and see the Matterhorn. It's just a cool run!"

By the way, his favorite restaurant is Findlerhof. He likes the high quality cuisine, the terrace and of course the view. Since his girlfriend works there, he naturally praises the great service too, which, from the bottom of my heart, I can only confirm. He also likes Fluhalp, because there is often a band playing in the winter garden. Another of Joel's favorite places is Adler Hitta (Adler Hut), with its beautiful terrace and live music.

You can tell he really loves Zermatt and the region and gets quite carried away when asked about his favorite places. And although he loves skiing, he finally adds the Restaurant Zum See and the mountain restaurant, Blatten: "At both places I can easily sit for an hour longer. Even though I'm usually drawn to the slopes! But it's simply so beautiful there"

Oh, I'm so happy that the season has started again and I can't wait to get on my skis! By the way, I didn't even know where to put my new skis at first. However, Alex showed me the lockable ski room in the Schloss Hotel. There is even a ski boot dryer! I thought that was particularly great because I don't like wet and cold feet.

And if the weather doesn't cooperate, that's no problem at all here at the Schloss Hotel. Our playroom has table football, table tennis, darts, Legos and much more. You will probably meet me and Alex in the billiard room, where we can linger for hours! Just come and join us!